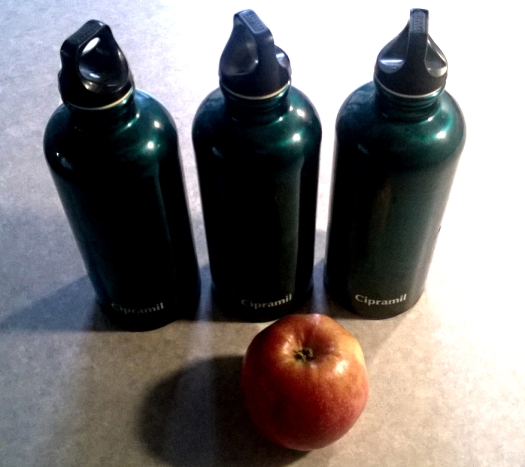 Keeping the doctor away: one apple and three bottles of Cipramil.

2016 is turning out to be the year of the internal saboteur, but the abbreviation I.S. is already taken. Examples are all around us of people deliberately choosing to inhibit their functioning.

In this town, people are dying their own hair green and getting misspelled tattoos like ‘No Regerts’. New buildings are getting fewer parking spaces than needed, not enough to discourage people from using cars, but just enough to inconvenience everyone. The Royal Bank of Scotland has told us to sell everything and put the cash in the freezer disguised as a chicken korma.

On a national level our politicians are fighting amongst themselves in each party. Jeremy Corbyn is suggesting running the Trident subs without the nukes on board. There’s a doctors’ strike that no-one can fully understand. And, in an unbelievable U turn, the chief medical officer says alcohol is really bad for you after all.

And if this wasn’t bad enough, David Bowie has died.

Psychoanalysts were good at explaining this kind of thing, examining the metaphorical bullets that people fired into their metaphorical feet, but they are gone, replaced by computerised CBT and web-based expressive writing.

There’s a theme to this: Medical Nemesis, which was the name of a book by Ivan Illich. Ivan’s idea was that doctors had medicalised significant areas of normal life and were set to colonise all human experience, by deeming everything to be Medical. Illich felt there was an inevitability to this process, much as he felt Communism would conquer the world, domino by domino. He also pointed out that a large amount of medical activity was counter-productive, so that the net effect of modern health care was marginal and in due course would become detrimental on balance.

Medical Nemesis was published in 1975, which was the year I went to medical school and David Bowie released Young Americans. Eerily and probably coincidentally, the rise and fall of Psychiatry as a successful enterprise has run in parallel with Bowie’s career. Studying the two timelines, the Bowie discography versus the history of psychiatry, there is a broadly positive correlation, with a slow decline after 1983. I expected to see something significant in 1990, to coincide with the launch of Clozapine, but there is only Tin Machine. No model is perfect.

The theme to our current medical nemesis is this: the counterproductive effects of medicine have been escalated so that they now outweigh the positive effects. After a brief period of medical effectiveness – basically the  few weeks that followed shutting down the cholera pump on Broad Street – we are back to doing harm to people.

It’s a bit complicated to say why, but we’re talking about the net effect. There is no doubt that some medical activities are helpful, such as removing marzipan and toy animals that children have accidentally stuck in their ears. But a lot of the old certainties, like spraying the countryside with antibiotics, are over.

Even in 1975, we were taught that the increasing life expectancy that occurred in the twentieth century was mainly due to improvements in hygiene and public health, rather than laser surgery and machines that went beep. Now it is possible that life expectancy is set to reduce. It is already reducing for those who are now in later life, particularly women.

Some of the factors that have inhibited the usefulness of medicine came from outside the profession, such as the food and alcohol industries. Some have come from health industry predators, such as management consultants. Mostly however, the bullets fired into the soft underbelly of medicine have been fired by doctors themselves. For those who like acronyms, the health industry has fallen victim to the 3 P’s, namely: Pomposity, Pretension and Ponderousness. These are the outward signs that medicine has gone where it doesn’t belong, ‘medicine gorn mad’ as Dr Allenby would have said.

Focussing on Mental Health for a moment, we are living through a very unhappy period. Round about the time that Illich wrote Medical Nemesis and Bowie became the thin white Duke, the treatment of mental illness was hitting a purple patch. Psychiatrists still worked out of large mental hospitals with hundreds of beds. About a third of the beds were occupied by patients with poor-outcome psychosis, the ones we pretend now don’t exist. Another third were allocated to elderly patients with dementia. Hospitals had wards that could deal with acutely disturbed psychotic patients, without bundling them into a van and sending them to a private hospital two hundred miles away.  But most of the patients were already in the community and there were satellite clinics and community nurses in most towns. Drug therapy, with the exception of Clozapine, had already peaked, using typical antipsychotics and tricyclic antidepressants. Medical training still revolved around the ‘firm’ model, each firm belonging to a Consultant. Trainees learned all the German words for mental phenomena and sat a proper exam with essays and a long case. There was no purchaser provider split. Hospitals were administered, not managed, by a triumvirate of administrator, nurse and doctor.

Can it be possible, 40 years later, with all the endeavour that has gone into research, reorganisation and regulation, all the millions of hours people have spent in committee meetings and working parties, all the billions of pounds spent on management consultants, that our services have actually deteriorated?

Making such an assertion, one is quickly accused of being a grumpy old man or woman. Suffice it to say that not everything a senior or experienced person says should be discounted automatically (just most of it).

There are many examples however of monumental enterprises that fail. The best known are IT projects like ‘Connecting for Health’ which was wound up in 2013, having spent more than £14 billion. The audit office concluded that ‘it was not demonstrated that the financial value of the benefits exceeds the cost of the Programme’. A scenario right out of Illich’s book.

Not only does medicine go where it doesn’t belong. Often it abandons areas where it does belong. For example, ECT. Without wishing to denigrate ECT, the evidence base for its usefulness is quite limited. Suffice it to say it probably works for certain types of acute psychotic condition, mainly the ones that it’s not used for. A lack of evidence that ECT was effective at all did not stop the Royal College setting up a complex system of training and accreditation, called ECTAS. It’s guidelines, along with those written by NICE, were stringent enough to put most ECT units out of business, much to the delight of those opposed to ECT, which is practically everyone.

Now, newer types of electrical and magnetic stimulation are coming out of the closet which are not evidence based or regulated or subject to the protective effects of the mental health act. For better or worse, ECT was regulated to death, but my tip is to hang on to those electrodes for now, pending the development of ‘swimming with electric eels’ holidays.

If Illich’s theory was correct, we would arrive at a point where medicine – in terms of its beneficial effect on society –  is taking exactly 100 steps backwards for every 100 it takes forwards. What is unclear is whether we have entered the recession yet. How will we know when the oil tanker of medicine has reached a standstill relative to the sea bed?

A possible indication of such a low point would be, say, identifying a medical condition that has recently been invented, by annexing an aspect of normal life. A condition that has escalated dramatically, filling thousands of outpatient clinics. A condition that can’t be treated effectively by health services. A condition where treatments are poorly evidenced and have clear harmful effects, like stunting growth. You know where I’m heading: by 2003, nearly 8% of American children were diagnosed ADHD. By 2011 this figure is said to have reached 11%, with a large increase in girls diagnosed with the disorder. As with life expectancy, and as Bowie would have noted, girls are the new boys.

In the metaphorical history of psychiatry then, ADHD falls into the long dark period, somewhere between Reality and The Next Day.