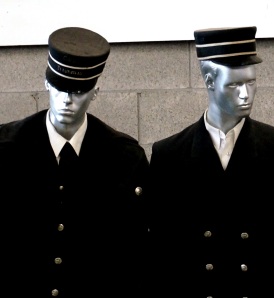 Hull Trains are quite influenced by the Terminator series.

On the breakfast news there is almost always a mental health item. There are two types of mental health news reports: the short one and the long one. On the short one, the presenter merely reads out two statements, one from a survey and one from the health service.

First statement: a survey conducted by a charity reveals that there are no services for the mentally ill north of Milton Keynes and that depressed people in the north are simply rounded up and dropped down coal mines.

Second statement: more people are being treated than ever before due to increased investment in acronyms like IPT and IAPT.

You wait for a moment of analysis or commentary, a denial from someone in the coal industry perhaps, or an acronym buff, but in a blink, its over to the Midi dress. Should it really end at the thickest part of the lower leg?

The longer version of the mental health report is just the short one followed by an interview with a ‘service user’. Typically, the service user seems suspiciously mentally well, despite their long period of suffering and eventual escape from the coal mine. It took years of waiting, but eventually they reached the top of the Mindfulness Therapy waiting list, after which they were cured in a jiffy and made ready for TV.

This week, we just had the short version: One in six people attempted suicide while on the waiting list for psychotherapy, which is more than a year on average. NHS England says that there are more mental health services than ever before and even now new acronyms for services are being coined at their new DOA. (gettit?)

It is such a relief when the news stops and Fred Dibnah’s World of Steam, Steel and Stone finally begins, even though every episode is the same. Then there is a program where people buy a small house at an auction, paint it magnolia and rent it out. After that two people try and decide whether to emigrate to Australia, nearly go and then don’t quite go. Following on, a lovable cockney sorts out some dodgy builders in the style of Jack Regan from The Sweeney. Daytime television can seem massively interesting, but only under certain circumstances.

Normally these programs leave the viewer underwhelmed, but that all changes if you get ill. Once you are debilitated and a little delirious, daytime television takes on a whole different dimension. The level of stimulation the human system requires, or can even tolerate, is greatly reduced in cases of biological malfunction.

The key to successful television seems to be following a formula. Even though we’ve seen it a thousand times, we still love a plot that ticks along like a Swiss clock. To a very alert person, formula means repetition and repetition means boredom. To a stressed or unwell person, formula means familiarity and familiarity means comfort. Entertainment has a long history of formulaic productions, from Punch and Judy through James Bond to Strictly Taxidermy. Every time we are presented with a repeatable pattern, the part of the mind that ticks boxes is comforted.

I once asked an older colleague how people used to treat serious mental illnesses before the invention of antipsychotics. His reply was ‘Institutionalisation’. At the time I took this to be an attempt at irony, especially as institutionalisation had come to be regarded as oppression. Now, I realise he was giving a serious answer. Reducing stimulation and imposing regularity were ways of calming people. Perhaps it is just a coincidence that large asylums closed just as daytime TV began. Or perhaps, television just happened to hit the right level of stimulation to suit chronically ill people. One person’s stultification is another persons action thriller. On the acute ward, I noticed that really ill people hardly watched TV, not even football, but could just about manage old Top Gear repeats on Dave.

Disruption of biological rhythms is almost the hallmark of Depression and the first thing that psychiatrists ask you about. Sleep pattern, diurnal mood variation, bowel habit etc. Disruption of biological rhythms is also the hallmark of twenty-first century society, now that shops and the internet are open all hours, pubs never close and you can watch Dr Who whenever you want. I’m not saying the two are causally related, any more than fridge ownership is causally related to crime statistics (other than ice pick murders).

But possibly Stress is being met with De-Stress, in the form of Repeatable Pattern Seeking Behaviour or RPSB, as it will never be called again (too similar to the RSPB, who are a very powerful lobby). Accordingly I may have to forgive people who own pets or buy lottery tickets as simply stressed people in search of fixed schedules. Perhaps they just have nothing to do – besides panic – between Street Patrol UK and Cash in the Attic.

If you just don’t ‘get’ the Fast and Furious series, now you can understand why the same bits are in every film. Humans like patterns. Much of our brain is a scanning device and every cell has a system of time clocks.

Which is why, even before they had CAT scans, Interferon or Clozapine, Regional Health Authorities had their own carpet designers. One design was blamed for people hallucinating. Another type caused terrible friction wounds to frail people. Our own hospital replaced carpets with ‘abattoir-chic’ red lino. Cue carpet jokes: Where to sweep things now?

Like TV programs, carpet that can look fine – just a bit hectic – when you are fully conscious and alert, may look like a pit of vipers to a delirious person. Wetherspoon’s know this only too well.

Last time I was really sick, I remember thinking The Weakest Link was a brilliant program. But after taking a Zantac it suddenly lost all its appeal. It goes to show, if you are sick, you need to titrate your choice of programming carefully against your drug therapy.

Like hospital carpet design, there probably needs to be special programming for sick people. Or just accept that most television is aimed at people with impairment and should be run by Occupational Therapists. It already has?  DIY SOS, Blue Peter, Celebrity Master Chef, Come dine with me, Extreme Fishing…

TV is the new OT and we even have one on the ward.