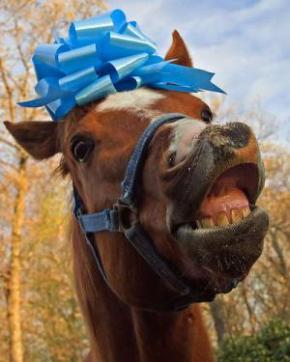 Got away with a scale and polish!

Some people felt the recent ‘horsegate’ revelations amounted to an attempt – by ‘Big Food’ – to soften up the consumer towards more overt horse consumption.

So far I see no signs of horse restaurants opening up, so I’m wondering if its really worth registering the trade mark  ‘Horses for Courses’.

The main effect of the horse scandal was to cause a tsunami of horse-related jokes and puns, like the above example, and a welcome reprise of horsey sayings and proverbs.

We are, as humans, portrayed as horses sometimes.

A person might be described as a ‘workhorse’ for instance.

They may be compared to a mule, if stubborn; or a donkey, if they suffer with ‘bradythinkia’. People who throw eggs at talent show judges are exhibiting ‘horseplay’, though this is one activity that horses have never even attempted.

You could take someone to water, but not make them drink, and this is a major problem in pubs and cafes nowadays, especially where there is free wifi. We know from Prince’s commentary on the modern world that his cousin was ‘doing horse’ only nine months after trying a reefer ‘4 the very first time’.

Is a gift horse a person who gives gifts, or is the horse the gift?

Either way, don’t look him in the mouth, even if you are a veterinary dentist, not without a mask and safety glasses anyway.

My knowledge of horses is really very limited. I go past them very slowly on the roads, and the person riding usually acknowledges this with a friendly gesture. I know they cost a lot to run, in terms of vet’s bills and sugar lumps. I feel sorry for the ones I see confined to a box trailer, stuck on the A1(M) for hours on end. I have never known a real horse to be called Dobbin. If I had a racehorse, I would name it ‘nine to two favourite’, just to confuse the bookies.

They seem surprisingly fragile. Quite minor ailments seem to upset them, such as sleeping in the wrong posture or falling over a rabbit hole.They are sensitive to even the mildest ironic remark.

All the care pathways for horses seem to end with the box ‘shoot’.

Do horses like being whipped and raced over a series of fences? Probably the answer is the same proportion of horses as humans who like sadomasochism or hurdling.

Do they even like having people ride on them? For most of their evolutionary history presumably they just ran about when they felt like it. Western movies always depict the wild horse as reluctant to get involved in the transport industry. Horsey people will shake their heads and tell me I just don’t get it.

Horses and people, they tell me, have a unique symbiotic relationship, where horse and master blend into a sublime transport unit. Its a bit like the way obese bikers’ tummies meld seamlessly into the saddle of a Gold Wing or Harley.

This brings us back to the idea of harmonious relationships and fundamentally, the kind of environment that suits the human system.

Today there are further useful news items from the Mappiness project, which aims to survey people’s real time levels of happiness using a smartphone app and random sampling.

These findings are dangerously revealing and potentially subversive. It is revealed that work can be toxic for instance, and that its better to live in a green rural – type environment than in a tiny box high over an industrial northern city.

Also, 22 years after the LaTour single, the last reliable report on this, it is revealed that people are still having sex.

Most of human evolutionary history people have not worked, at least not in the way that has become the norm since the industrial revolution. People were hunters and gatherers for thousands of years. Accordingly, the natural state for human happiness seems to be ‘pottering about’.

Of course many people have known this for years. But oddly, the millions of ‘shed people’ have been portrayed as either lazy or autistic, not to mention shabby. Shopping is perhaps the one surviving pottering activity that remains fashionable, but all too often shopping behaviour is spoiled by buying stuff.

A clue to all this should have been the way ‘browsers’ like Netscape took off in the nineties. Browsing the web suits people better than watching television, even when ‘channel-hopping ‘is allowed.

Pottering about is the default position for human behaviour before ‘musts, haves and shoulds’ are loaded on people.

My impression is that horses are pottering animals too. Mainly they eat. But they are a bit curious to meet people. Sometimes they will get up and run for no apparent reason, to a similar bit of field.

Horses and humans have been the victims of a massive confidence trick. Basically this is that they benefit from carrying a burden.

Sadly for horses, they cannot operate smartphones, so their unhappiness cannot yet be measured.

Look, they are shaking their heads and saying ‘nay’. I think they have made their position clear enough.